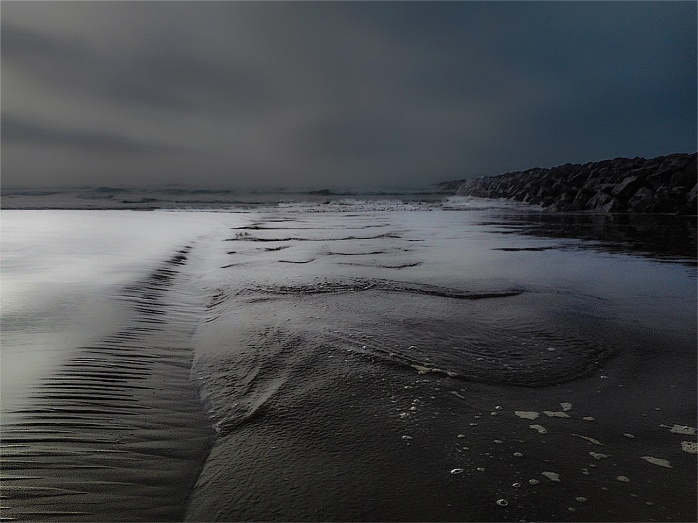 There is this quiet motion

When there are the smells of summer,

When rivers are a language,

Creeping through echoes of green…

Undecided between dream and reality…

When the soft ground molds to feet

A carpet compiled by all seasons…

In the momentary wet sand…

When mountains are careful

with the selection of words…

(Click on image to enlarge. “The Movement of Lines”) 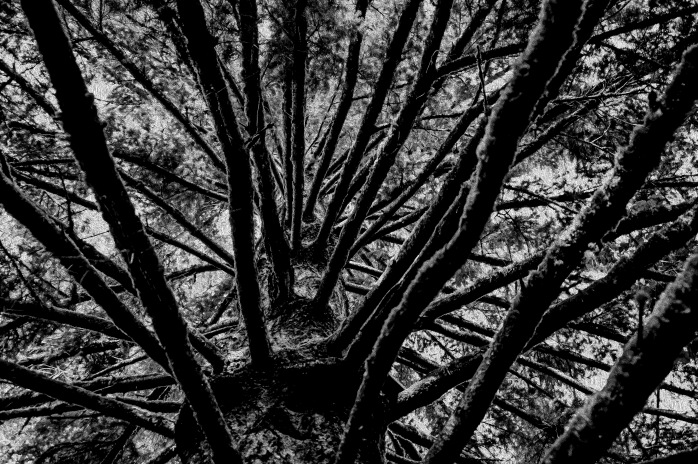 The boy picks Wapato in the marsh

Just the top stems, not the tubers.

He doesn’t see me standing

In the mud, watching.

Walk through the marsh.

As if he’s searching for a vase.

Ruffling all plants around us

Including the ones in his hand.

Near us are shy egrets

With their long necks, poking

Among a dried-out lake bed.

They’ve seen us, hear us

Over flowers or watchers.

As I move, the mud is loud

Echoing off trees, off the sky.

Off of all the moments we are taking.

He disappears behind a cottonwood

And the play of clouds and sun.

My pant legs are caked with soil.

The egrets stick to their search

Of the wet marshland grass. 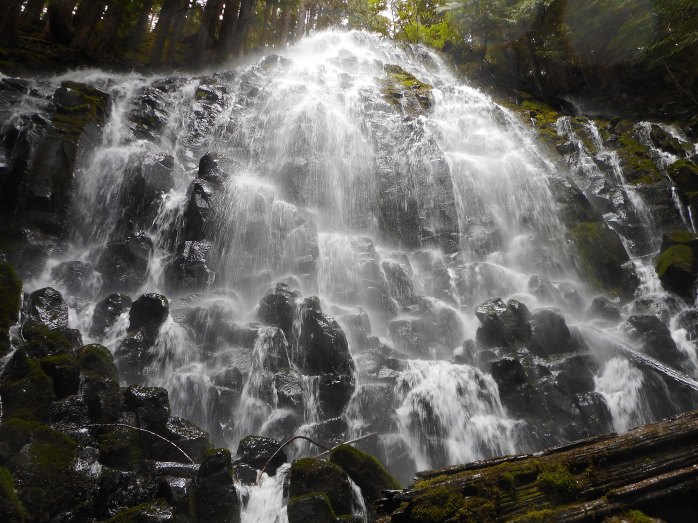 That voice, a pact between mountain and moisture, is a quiet call to us

Its language—slow—near wordless, near nothing, paints upon the brow reminders…

Of lost talk of the ancient shape of myths, wrapped around delicate, heavy truths,

Source of our combined story.

We arrive with city hands, parched

To drink for the first time—again.

When Josephine The Singer Leaves 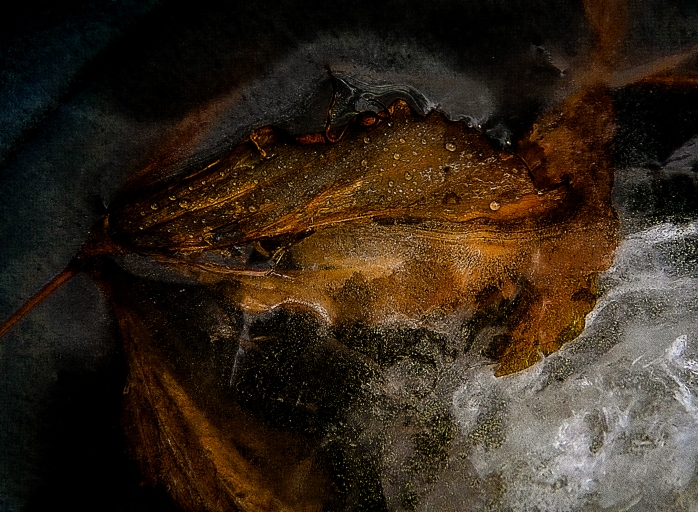 There’s a burning inside her and you can see it when she’s holding in her voice. You’re lucky she holds it in, for when it hits air, it cuts you. These cuts cause you to fall inside her furnace, scald you, sting your heart or your ego. Most of time both.

She doesn’t mean to burn. Her heart is not fire. It has leapt to save those who burn with different flames. Fires who are down to no one else except themselves.

We think this is the reason she burns. No one leaps for her. So, all she sees is our scurrying, a maze leading back to the magnetized, which we can’t admit is us.

Still, we wait for her to sing, wait to be cut, to feel the searing heat. At times we think ourselves impervious to her scorch. Other times, we find ourselves mimicking her hot language, thinking if we made it ours, she would be redeemed. Neither are true. We’re just resilient, tending to our cumulative scars as if they were a collection of special artifacts.

We fear the day she will leave. It’s never discussed. It’s an underlying nervousness, a speck of common knowledge. This causes us to run about, quicker, faster, frantic, attracted to our own end, piling up causes natural and unnatural. And this loop seems like new ground, yet feels worn, a spiral, gravity. We don’t know.

We’re no historians. We forget easily.

(Image is entitled “Dispersed”. Click on it to view it.) 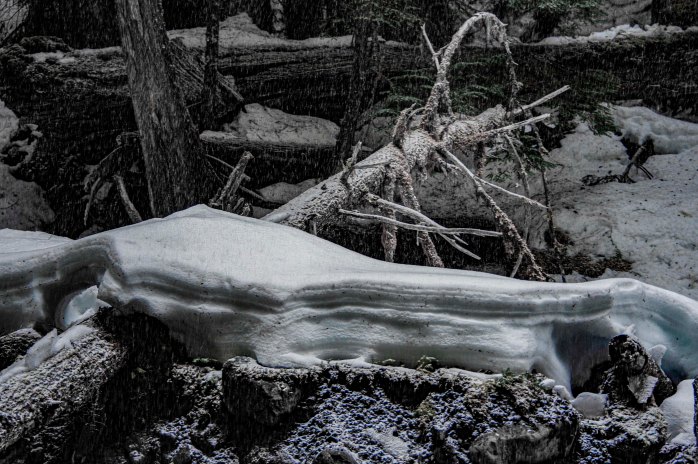 Underneath is uneven ground

As we feel the contours, so near our feet

To walk is awareness

Of how we place 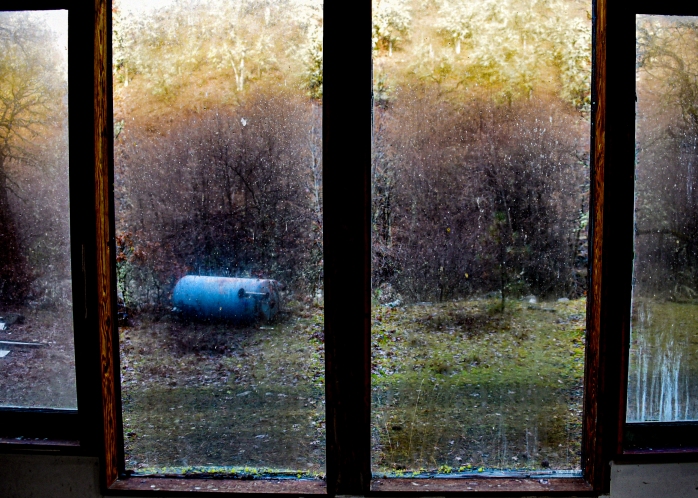 She’s a tangent, planting words in wild rows that release constant seeds, adrift, landing upon her skin, a skin she reads to herself.

Her heartbreak, an apocalypse of reincarnations, dust on the floor, dry paper, bits, clumps, wheat lost from the chaff, molded to her insides, feeling the roughness of each word.

She sweeps the floor of these words, where thousands threw their crumbs, recognizes the smell, small mixtures of sweet and rot, rooted, glued to a pattern, reapplied to the pollination.

Her eyes like rain and sun fall heavy upon the sprout, sounding out, curling around the heads of her lovers, laying hold upon their ears, their hearts but vines and flowers. 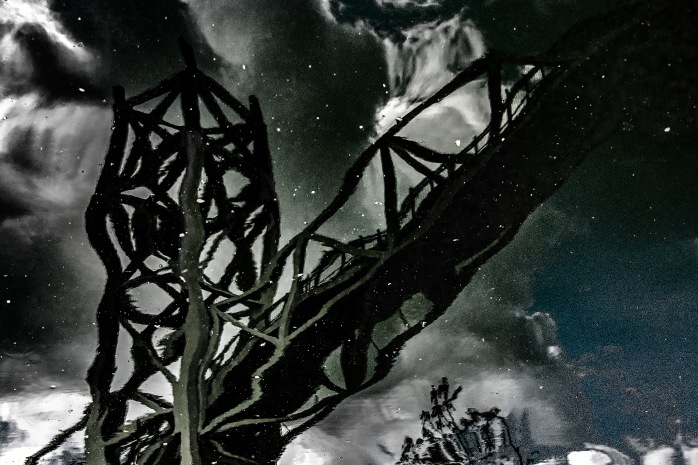 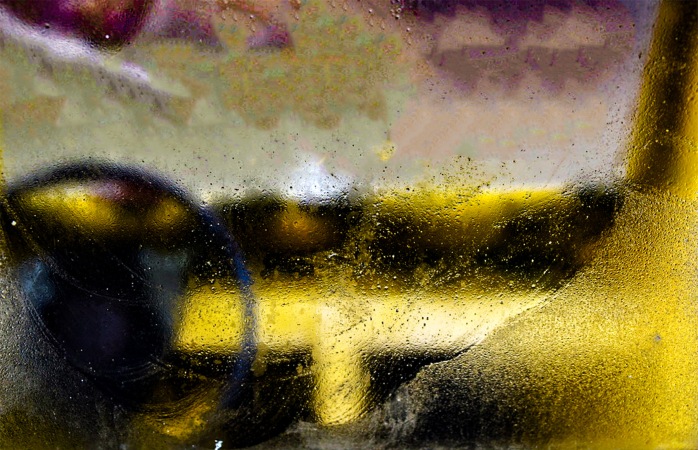 Her makeup was a postmodernist painting, swashes of pinks and blues, wayward paint upon skin. When she put it on, she grinned, but didn’t smile.

Inside, her voice was a thunder. Shook things. Came from her bones, resonated outwards, circles, waves. I imagine it’s still travelling the universe. She was a ruffian and a clown, stumbling through song, a child stuffed in her cheeks.

Her head raised high when that tone of hers hit air. She conjured up her soul in its entirety.

We sang together. Crouch songs. She told me I could sing as well as her, if I wanted to. I believed her, but I never gravitated towards what I believed. She did. As if she were a realization of her own belief, a voice larger than imagination, mythic, wrapped around you, took you on a ride.

Once at Carol the Krishna’s, the first food cart, walking the bus mall, peering at me from across the street. Her face clear, bright, free of makeup. I wave. She moves on. Stoic.

Once, dancing at the Overlook. I’m behind a Radio Shack mixer and two unevenly balanced turntables, in the backroom, next to the dice table, with a plate of homemade mac and cheese, cornbread, greens, hot sauce. I see her Brillo Pad hair bobbing as she dances, taller than everyone, as if she glows. She’s wearing makeup. I wonder if she’ll get kissed, even if only in the dark. 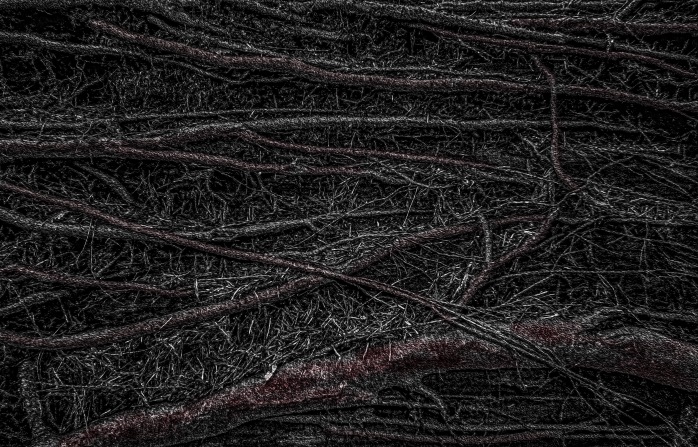 He had lost an eye. Though, its orb still in its socket had turned a blurry blue, misty, had developed a different kind of sight. It was a pain experienced through years of looking, looking, searching. A pain no one could comprehend. Not even himself.

This pain had the temper of a two-year-old, set off by triggers and misperceptions from a wayward stare to a misconstrued comment. Violence shot out of him, red, hot, stinging. I noticed when in this rage, his long hair, parted in the middle, changed as if it were caught in a hurricane, but in slow motion. After an episode, strands of it would appear jagged, outliers of the smoothness of his mane. I thought the streets had done this to him. I was wrong and I was right.

He was never really made up of the streets. The streets were made up by him. An Old Town that used to be, a November rain, black kids selling stripped-down crack cocaine, a fifth of rut gut, sloppy punk shows no one would remember, dayglo artists nailing canvases onto walls of plywood painted black, goth girls looking at themselves in mirrors, only their hands moving, not their bodies. Everything was never moving.

As I looked at his dead eye, lost in a random fight, I felt his frustration, his fear, his hopelessness. And even though he irritated me to no ends, I saw how vulnerable he was.

We took long walks along the Deschutes where few were allowed to go. He was different there. We talked of steelheads and Chinooks. We visited Chuck and listened to metal so loud, the desert lost its hearing. We picked up arrowheads and threw them back to where we found them, to sage and grass. And along this desert river, that twisted like snakes through dry canyons, both sides of its banks scarred, we hung on to ourselves (though there were reasons to lose our minds) right down to where it met the Columbia. 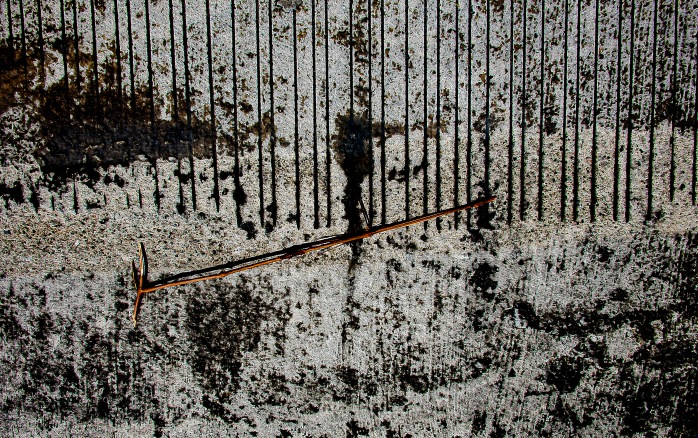 More images can be found here.